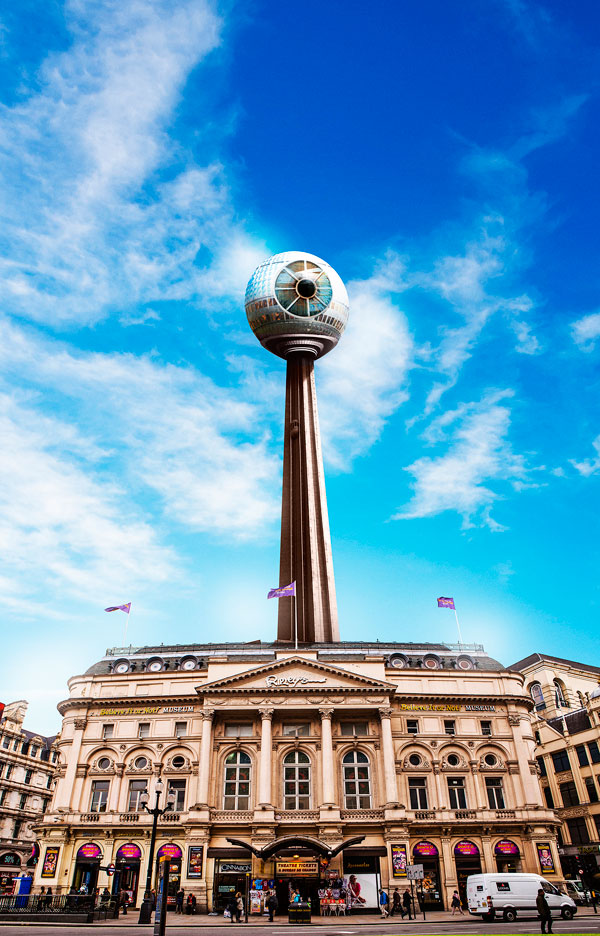 Central London attraction, Ripley’s Believe It or Not! London, known for its bizarre artefacts and interactive experiences, is set to launch the world’s first 500ft spherical restaurant, the ‘London Eyeball’.

Following the recent news about the planned redevelopment of the Trocadero, Ripley’s Believe It or Not! London plans to build the restaurant on the top of the existing attraction, located at 1 Piccadilly Circus. Construction is due to start later in the month for launch in time for summer 2015. The restaurant will offer a wonderfully weird dining experience including fish and sheep’s heads and fried lizards as well as the chance to view the infamously hectic action that takes place in Piccadilly Circus with 360 degree views through the giant glass eyeball eatery. Inspired by the ‘Cuban eye popper’, Avelino Perez Matos, the restaurant takes its design inspiration from the human eyeball. Diners will be able to indulge in a range of themed food and drinks which also feature other prominent characters from the attraction. For example:

Rolf Pilao, spokesperson for Ripley’s Believe It or Not! London, said: “We are incredibly excited about the new restaurant development. We will be the first of the global Ripley’s Believe It or Not! attractions to create such a unique experience and  as we’ve seen with other London view-based attractions, such as The Shard and the London Eye, it is a hugely popular concept that we are keen to deliver with a bit of a twist. We expect the new restaurant to be a hit with visitors to the capital who want to see it from a very different angle as well as Londoners keen to experience something new and quirky.”

PS.. We are sure this is an April Fool’s Day joke