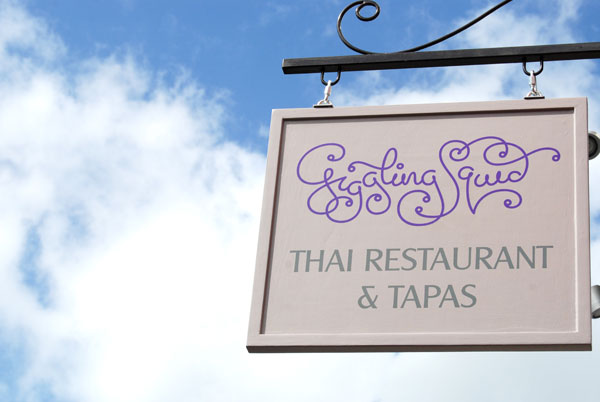 Giggling Squid, the fast growing restaurant chain which introduced the ‘Thai Tapas’ concept to Britain, is to open in Marlow in Buckinghamshire on  Monday 10th February.

The 90-seater, two-floor restaurant will open on the former Pachangas Mexican restaurant site in West Street.

Marlow is Giggling Squid’s eighth location – and is set to be followed by openings in Horsham and Maidstone.  The group is also in advanced negotiations on a further six of prime sites – on its quest to become the first national Thai chain in the UK, with a portfolio of 80-strong properties inside 7 years.

Owned by husband and wife team Andy and Pranee Laurillard (the brand is derived from the nickname of one of their three children), Giggling Squid’s formula of serving “rustic” Thai cuisine, with the emphasis on sea- and street-food, is a winning one.

Since opening the first Giggling Squid in 2009, the pair deliberately set out to look and cook different – using drift wood and reclaimed timbers, to create a modern chic environment.

Queues forming outside its recent openings for the “hottest tables in town” are not an unusual sight.  Despite its low profile during extensive refurbishments which cost £300,000, the new restaurant has received scores of emails from the public wishing to book tables for its long-awaited opening.

The evening menu is more extensive with over 50 dishes available.  The ever popular Thai Green Chicken Curry is £8.95.

“It’s all down to the food,” says Andy Laurillard commenting on what makes the restaurants a success, which has come against a back drop of one of the longest economic down turns in recent history.

Employing the right staff is key. Pranee, a masters business graduate, who runs the operations side of the company now knows most of the UK’s Thai chefs.  She has an extensive database of good staff – all eager to join the organisation.

Treating people well and paying them above the norm, is the solution to staff shortages which the industry has encountered since the introduction of new, stricter immigration controls, according to the Laurillards.

“Thai managers are pretty thin on the ground – you can’t buy in our type of food from national suppliers and just have Polish chefs reheat it,” said Pranee.