South African chef’s marinade and sauce hit a 2:1, both striking gold in the Great Taste Awards 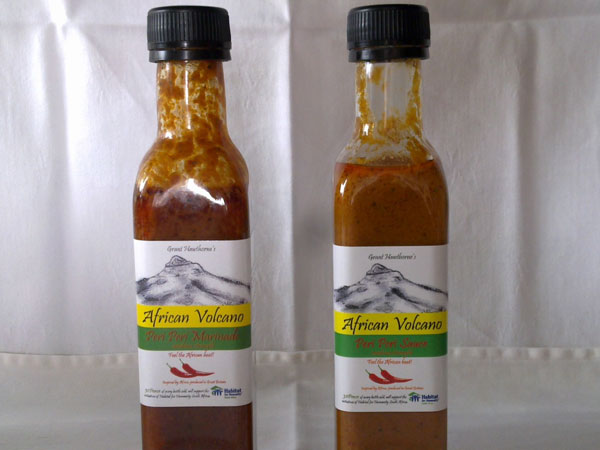 Says Hawthorne: “I am delighted that four months after launching my brand of peri-peri sauce and marinade, they have both won awards in the 2012/13 Great Taste Awards, run by Great Britain’s Guild of Fine Food.”

He says, as a chef you’re trained with the mantra: taste, test, taste again. It is all about the taste.

“The development of the marinade and sauce to complement each other is reaffirmed, by both winning gold,”

The vegetarian-friendly marinade achieved one of less than 700 double gold’s awarded this year, with the sauce achieving gold. The judges described the marinade as: good richness, pleasant after taste”

“Peri Peri is not just about chicken,” says Hawthorne, “It can be used to enhance and complement prawns, pork, beef and vegetables – just about anything. People are starting to get adventurous and play with the flavours in a variety of dishes. I’m always on the lookout for new recipes and ideas to Tweet and email.”

“I publish my recipes that incorporate both the sauce and marinade so that people can experiment with them at home.”

A donation of 30 pence from every bottle sold supports the initiatives of Habitat for Humanity’s Youth Build project in Cape Town.

Hawthorne’s African Volcano stall at the Maltby Street food market in Bermondsey, London, every Saturday is a hit among foodies who can try a variety of peri peri-infused dishes like chicken prego rolls on homemade Portuguese bread, slow-roasted pulled pork on a peri peri bap and giant flame-grilled tiger prawns.

He says a milder and hotter version of both the sauce and marinade are in the pipeline.